In 1937 took place an event of great importance in the Latin America of that epoch, the Pan American Flight "Por el Faro de Colón" (For the Columbus Lighthouse), organized by military aviators of Cuba and Dominican Republic. The flight should travel through the heavens of the western hemisphere after the Fifth American International Conference, where unanimously was approved a resolution that appeal to built a Great Lighthouse in Santo Domingo. 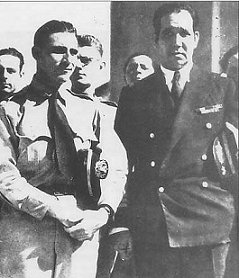 At the left : Menéndez Peláez, navigator of the group. Besides the Colonel Angel Gonzalez, Cuban Constitutional Navy Chieff.

This project in honor of the Great Admiral Columbus, would be made with the cooperation of the towns and governments of America. The governments of Cuba and Dominican Republic support the plan.

The idea was supported by the President of Cuba Federico Laredo Bru, the President of the Dominican Republic Rafael Trujillo, the General Staff Chieff of the Cuban Army Fulgencio Batista, and the Cuban Navy Chieff Colonel Angel A. González. Was formed a group of planes that should made the good will flight that calling to the Latin American peoples for their participation in the project.

The man and their airplanes


Three Cuban airplanes Stinson would fly, one of the Navy Aviation, other of the Cuban Army Air Corp (CAEC), both of four places and one that was bought by the Society Precolombina, all they baptized like the Columbus ships, and a fourth Dominican airplane. They were piloted by:

The Lt. Antonio Menéndez Peláez was the navigator of the group, and already had experience of long range flights, when was the first Latin-American to overflight alone the Atlantic in its one engined Lockheed 8A Sirius, during its flight Camaguey-Sevilla of 1936. The major Francisco Miranda was one of the two first pilots of the Dominican aviation, and was graduated of pilot in Cuba in the year 1931. The fourth airplane was a Curtiss Wright CR-19R acquired by the Dominican Government in United States for the participation in the flight. That was a airplane of the Dominican National Army Air Corp (CAENA), and was one of the two arrived in January of 1937.


Were planned 53 phases. On November 12, 1937, at 09.00 o'clock the four airplanes take off from the airport Miraflores in Dominican Republic, where was the President Rafael L. Trujillo, members of the Dominican Government, members of the Cuban Mission, diplomatics, schools and public in general. They landed in San Juan of Puerto Rico, at 12.40 o'clock of the same day. 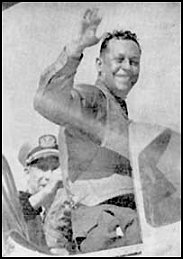 Frank Féliz Miranda, leader of the Flight, in the airplane Colón. Behind him, Menéndez Peláez

On November 14, at 06.30 o'clock they take off to Caracas in Venezuela, landing in the airport Guaira in Maiquetía at the 11.20 o'clock and from there the November 17 at 07.15 o'clock hours, they continued to Port Spain in Trinity. The following day 18 at 06.30 o'clock they left to the next goal, Paramaribo, capital of the Dutch Guayana where arrived at 14.30 o'clock, after have flown 6 hours and more than 630 miles, under the tropical sun.

On November 19, they continued to Belén Do Pará in Brazil, to 820 miles of distance, and from there the day 21 at 13.40 o'clock, they continued to Fortaleza city, Brazil where landed at 16.30 o'clock after overflight the Amazonas jungle without problem. In Brazil they visit Natal, Recife, Bahía and Río de Janeiro. On November 29 they take off from Porto Alegre in Río de Janeiro and their next point was Montevideo, Uruguay, where arrived at 12.45 o'clock the day 30. Here they were various days, and on December 3 they take off from the Military Aerodrome "El Palomar" near Buenos Aires in Argentina.  Five days later the day 8, thay flew to Santiago de Chile where arrived the day 9, and some days later they take off to La Paz, Bolivia where landed the day 13, where in similar form to the other countries, they were warmly homaged.

The December 15, disappeared in flight the airplane called "la Niña" piloted by the Lt. Feliciano Risetch, when all they were wrapped in a strong fog that forced the land in Pisco of the airplanes "Colon" and "La Pinta". The Airplane "Santa María" continued flight and landing in Lima, Peru at 13.20 o'clock of that same day.

After an intense search without positive result, the airplanes "Colon" and "La Pinta" decide to continue their flight to Lima, Peru, arriving at 10.55 o'clock to the airport of Limatambo. Thirty-five hours later, when the radio communication work again, they achieved to establish contact with the other plane informing that they landing in the valley of San Juan. They all together continued the crossing, flying to Colombia, arriving at Bogota on December 26.


The day 29, after technical revisions and the refueled, they take off from Bogotá to Panama. Few minutes later, the three Cuban airplanes crashed near Cali, Department of El Valle in some 12 Kilometers, the three lit in flames, according to an report of the SCADTA airline. By the reports collected in the place of accident, the aviators flew in the direction of the Cali River, and they found unforeseen inside their dangerous basin and inside a storm, the airplanes were overweight, and they not could take sufficient height to avoid the danger, which cost the life to the seven heroic Cuban crews.

The witnesses affirmed that first crashed the biggest airplane, the "Santa María", later "La Niña" and finally "La Pinta", that tried to return when seeing the luck of the "Santa María". The Dominican airplane "Colon", that was behind and flying to high height could not be noticed of what was occurring. Only after landing in Panama at 14.30 o'clock, Miranda know what happened.

The remainders of the aviators were received in Cuba with large scenes of pain. They were exposed in the National Capitoly, and to the funerals arrived the President, others member of the government, the diplomatics and thousands of Havaners. They were exhumed in the Military Pantheon of the Colon Cemetery. In December of 1938 the Cuban Army Air Corp (CAEC) made a homage to the perished, when in three CW-19R airplanes, serialed N° 50, 51, 52 flew to Cali, Colombia. In this opportunity the Cuban airplanes had additional fuel tanks in the fuselage, possibly the first time that this was made in Latin America. In 1940 the Cuban Navy Aviation performs another good will  flight "For the Columbus Lighthouse", by 22 Latin American countries, in a Howard DGA-8, flying some 36.000 km without any incident.

Sources and others resources