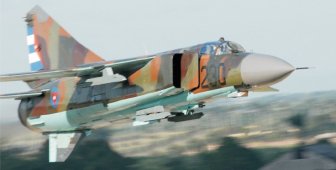 The MiG-15 Fagot in Cuba Ruben Urribarres The first MiG-15 arrive at Cuba at the end of May of 1961, a month after Bay of Pigs. They were 20 MiG-15bis and 4 MiG-15UTI. With these equipment are formed the first two MiG-15bis Squadrons. Cuban Missile Crisis. Hunting the CIA ship Rex.

The MiG-17 Fresco in Cuba Ruben Urribarres The first MiG-17AS arrive at Cuba at the beginning of 1964, destined to Santa Clara. Its main mission was to fight as fighter-bombers. The MiG-17AS were a rare version with air-air missiles. In foreign campaign. Angola, Ethiopie, others countries.

The MiG-19 Farmer in Cuba Ruben Urribarres By the Missile Crisis in October of 1962, were in service 11 MiG-19P. This aircraft converts the FAR in the first Latin American Air Force with supersonics fighters. At the same time they are the first soviet interceptor with all weather capacity, thanks to its radar.

The MiG-21 Fishbed in Cuba Ruben Urribarres In total from 1962 to 1989 to Cuba arrives some 270 MiG-21 fighters in 9 versions, being the main combat aircraft of the country during the Cold War.

The Operation Pico (spanish) Ruben Urribarres The Cuban MiG-21 'attack' the Dominican Republic. An incident with a Cuban ship retained by the Dominican Republic in 1977, almost carries to a conflict between the two countries, resolved after the demonstration of power of various MiG-21 of the Cuban FAR over the neighboring country.

The Cuban Air Force in the Ogaden War (Etiophia) (spanish) Ruben Urribarres Somalia never recovered from the defeat in the war of the Ogaden in 1977-1978 at the hands of Ethiopian and Cuban armies. The decisive participation of the MiG-17 and MiG-21 Cuban in this conflict.

The MiG-23 Flogger in Cuba Ruben Urribarres This was the most important fighter of the USSR in the 70-80s, with their variable-geometry configuration and nuclear capacity. The appear in the FAR of these airplanes, considerably growed its attack capacity, which trembles the political circles in USA. The Cuban MiG-23 Crisis.

The Cuban MiG-23 in air-ground action (in Angola) (spanish) Ruben Urribarres Air support missions in the Angolan War, against the South African Army and the UNITA guerrillas. The Cuito Cuanavale victory, Attack of Calueque, others actions.

The Cuban MiG-23 in air-air action (in Angola) (spanish) Ruben Urribarres The Fighters that won the air Superiority in Angolan War against the South Africa Air Force, armed with Mirage F1 and Mirage-III

The MiG-29 Fulcrum in Cuba Ruben Urribarres The first 4th generation soviet fighter. The shoot down of 2 Cessna-337 of the the exiled organization Brothers to the Rescue Cessna-337 Cuban Air Force. Others aircrafts

Cuban built airplanes (spanish) Ruben Urribarres Without being an industrialized country, Cuba has made a modest effort in the field of the national aeronautical engineering, reflected today in this article.

The North American F-51 Mustang in Cuba Ruben Urribarres Arrival of the Mustangs to Cuba in 1958 on clandestine flights into the rebel territory. Membership in the rebel antibatistianos. His fate after the revolution

Birth of the Cuban Army Air Corp (1913-1924) Ruben Urribarres Historical beginnings - First airplanes in Cuba - The Aviation pioneers Parlá and Rosillo and the legendary "Flight of audacious" - The military aviation born - Some flights of the new aviation - The First World War - After the war. The first official airplanes - The epoch of the Curtiss Jenny in Cuba - The conspiracy of "Veterans and Patriots" and Rubén Martínez Villena

Audacious Flight of Rosillo and Parlá (1913) Ruben Urribarres The first international flight of Latin America, and world record of distance, made in 1913 over the sea by two Cuban aviation pioneers, in the epoch of the fragile airplanes and audacious feats.

The Trasatlantic Flight of Menéndez Peláez (1936). Ruben Urribarres The Cuban military aviator Menéndez Peláez, becomes in 1936 the first Hispanic that crossing the Atlantic Ocean from America to Europe, opening new air routes that later would be exploited with success.

Pan-American Flight "For the Columbus Lighthouse" (1937). Ruben Urribarres In 1937 the Cuban and Dominican aviators made this famous flight of good will by various countries of the continent, that finishes tragically, perishing Menéndez Peláez and six of their companions. In 1938 and 1940 the Aviation of the Cuban Army and the Cuban Navy repeat the feat.

The Cuban Air Force at the Second World War (1939-1945). Ruben Urribarres Organization changes of the aviation - Airplanes bought in 1939-1941 - Cuba enters the war - New airplanes for the conflict - The Americans landed in Cuba - The training programs increased - Accidents in the period 1943-1945

The Cuban Air Force: The Cayo Confites prosperity with their New Equipment (1947-1952) Ruben Urribarres Expedition against Trujillo - The airplanes of the Legion are confiscated - Results for the Air Corp - Promotions of the Aviation School and events of the period 1947-1952 - New airplanes and the first helicopters

The Cuban Army Air Force (FAEC) and Batista (1952-1955). Ruben Urribarres Batista´s changes in the aviation. The FAEC - Mutual Defence Program with United States - Promotions of the aviation school under the new programs - New equipment - The sound barrier and other events - The F-47D Thunderbolts. Activities and accidents

The Cuban Army Air Force against the Fidel´s guerrilla (1956-1958). Ruben Urribarres The hunt of the Granma yacht - The battle of Alegría de Pío - The Army´s offensive in May, 1958 - Operation "Antiaérea": Kidnap of Americans to stop the FAEC - The Battle of Guisa

The Rebel Air Force, the guerrilla aviation (1958). Ruben Urribarres First airplane to the Castro's guerrilla. Creation of the FAR. The FAEC against the FAR. Rebels Helicopter and bombs. Military Airplanes of the FAR

The Rebel Air Force operations against Batista (1958). Ruben Urribarres Attacks of the FAEC to the runway of FAR in Mayarí Arriba - Fidelist Mustangs - Attack to the headquarters of La Maya - Attack to Sagua de Tánamo - Operational Results of the FAR

Cuban Air Force. Period after the 1959 Revolution, to today

Bay of Pigs: The Guatemalan connection Mario Overall  With the recent declassification of a whole bunch of CIA papers dealing with the Bay of Pigs invasion, some obscure subjects are seeing the light of day. In this article the author takes us on a guided tour inside of a CIA secret airbase in Guatemala, known as JMMadd.

The Rage of the Furies Mario Overall  This article deals with the operational history of the Cuban Air Force's Hawker Sea Fury Squadron, including its participation during the Bay of Pigs incident.

Che Guevara, Cuban Pilot Ruben Urribarres The Major Ernesto Che Guevara was a great aviation lover, and in Cuba he was graduated as pilot, flying more than 1,000 hours in different types of airplanes of tha Cuban Air Force.

Operation Carlota Gabriel García Márquez  The Nobel Prize of Literature counts the beginnings of the Cuban military mission in Angola, the first secret flights of Cubans special troops to the African country in the legendaries Bristol Britannia, the cultural, political, and historic causes that move Cuba to the encounter of its African roots.

The Four engined Tupolevs in Cuba (spanish) Ruben Urribarres By 1962 the intensity of the loops between Cuba and the Soviet Union required that be to opened a direct air route, that beginning the gigantic aircrafts Tu-114. Later in Cuba were based the aircrafts Tu-95 and Tu-142 Bear of the VVS and the VMF of the USSR, whiles flights around USA would be some of the symbols of the Cold War.

The Ethiopian War (Ogaden)(spanish) Ruben Urribarres In 1977 Ethiopia is invaded by Somalia, and asks helps military to Cuba. As part of the military contingent military, arrive Cubans pilots, that fight together the ethiopian until the victory of 1978. 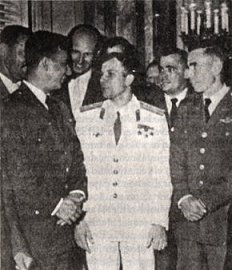 From left to right, the Bay of Pigs veterans Alvaro Prendes, Rafael del Pino, and Enrique Carreras, with the First World Astronaut, the Major of the Soviet VVS Yuri Gagarin (white uniform), one week after the battles. Havana , April of 1961 (Photo from the book "Proa a la libertad")

The Cuban Civil Aviation at the Post War time (1946-1958) Ruben Urribarres Decrees of the Government - New Cuban companies - Cubana, its routes and equipment - The State and the aviation - New equipment and routes of Cubana - The other Cuban airlines- Other events of the decade - International airlines operating since Havana at the 1958.

The Cuban Civil Aviation after the Revolution of 1959 Ruben Urribarres New times - The legendaryes Britannia - Cubana, the one airline of the country - Confiscated the airplane of Fidel - Bay of Pigs and Cubana - The new Soviet airplanes - Cuban in the Guiness - The seventies. Toward new continents - New equipment - The routes of the decade - Crime over the sea: The DC-8 exploited in Barbados.

The Cuban Civil Aviation in the eighties. Consolidation. Ruben Urribarres Aerocaribbean - New equipment - New routes of the decade - Mirages against Ilyushin - Changes in the headquarters - The nineties. Again the tourists and the western equipment - New politics - New airplanes - The Concord in Cuba - Dismal find - Black Week of Cubana - The American Embargo "Throwing him to the stars" - Reclamation of flights over United States.

The Cuban Civil Aviation: New routes of the ninetyes Ruben Urribarres Routes of today - Economic Results - Chronology of the Cuban airlines in the history.

Historical reviews on all tanks that has received the Cuban army in its history, starting their first tanks in 1942 to enter the war against the axis, Batista tanks, armored Czechs and Soviets after the revolution. The Cuban armoured units successfully in Bay of Pigs, Syria, Angola, Ethiopia, fighting enemies such as Israel, South Africa and Somalia or the CIA.