Some sources are in an error when say that the first F-51D Mustangs were appeared in Cuba in 1947, by the Pact of Rio of that year, which is not correct.

In reality arrived at Cuba only in 1958, and secretly. The guerrilla of the brothers Fidel and Raul Castro organize their own little Rebel Air Force (FAR) in the Second Front "Frank Pais" on April 12, 1958. The "Movement 26 of July" of Castro has the financial support of the Cuban exiles, and they financed the secret purchase of various airplanes outside Cuba. In Venezuela were done contacts to buy two F-51D Mustangs, without result.

But in United States had success. Between the equipment that were bought here, were two F-51D that were acquired in Miami, US like waste of war and without guns.  On November 13, 1958 the coordinator Haydee Santamaria wrote to Raul Castro (The FAR was under its command) :

"We expect inside days, that Michel was there with two F-51, for be gunned here". Michel Yabor was one of the rebels pilot. 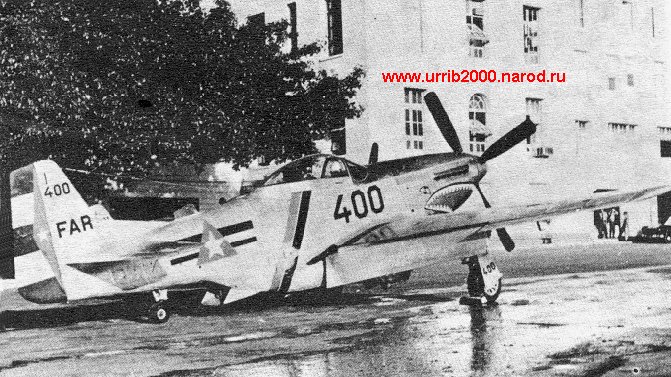 The first Mustang (N5422V) already was being examined since April of 1958 by revolutionary sympathizes, and the owner was the Leeward Aeronautical Sales, of Miami, that bought it by $1,067,00 in 1957 as waste of war. It was bought November 18, 1958, and the pilot Allen McDonald wrote the form ACA-1362 for a "local test and test flight", then supposedly he flew from US to Cuba.

The second Mustang (N68DR) originally was dropped by the Royal Canadian Air Force in 1956 and delivered to the Stinson Field Aircraft, of San Antonio, Texas. Here he receive the registers N68DR, passing for various users of Tennessee and Kansas, and finishing in Miami as the N3990A, where was bought for the same Allen McDonald, that too supposedly flew with him to Cuba secretly on November 20.

A third Mustang (N89E), an ex-RCAF too, supposedly has the same luck to Cuba, acquiring all three the registers FAR-201, 301 and 401 respectively.

This it is the known version in US. But in reality appear in Cuba only two Mustangs (N5422V and N68DR), that arrive at the Caribbean island together some days after, on November 23 at the afternoon, flying directly from US to the rebel aerodrome of Mayari Arriba, piloted by Michel Yabor and Adolfo Diaz Vazquez and not by Allen. The register will be the FAR-400 and 401.


That same day 23 of November at the morning this rebel aerodrome of Mayari Arriba has been attacked by two F-47D Thunderboltof the government FAEC, and the rebels gunners, when seeing again the speeder silhouette of two fighters, give the voice of alarm, and begin to shoot. A pass by the first Mustang in low level flight was greeted by the shoots of the Browning Cal.30, that impact it in the right wing tank and the tail. The rebel Captain Orestes del Rio, that was expecting the arrival of the Mustangs, leaves running agitating the hands and ordering the stop fire to the gunners, that surprised, stop shooting.

The two Mustangs land and are moved to a refuge for the works with the machine guns and to hide them of the FAEC (their F-47D the next day followed attacking the same aerodrome, without discover the Mustangs). Raul Castro is please with the appear of the first rebels combat fighters F-51 and writes: "They Are wonderful, being at present in sure places, expecting for the machine guns to begin to operate, we since are preparing the Napalm bombs, this will be the last blow to the regimen in the battles for the East"

Begins the intense job in the two Mustangs, and on December 28 is ordered to transfer them to the new captured aerodrome of Imias, for which both airplanes must be prepared as soon as possible. On December 31, 1958 at ten o'clock of the night already is ready one of them. And January 1, 1959, early by the morning, the mechanics of the Mustangs are informed by the radio ADF of the F-51, about the flees of Batista. The war finish with the victory. The news stimulate them, and at 11 o'clock of the morning both aircrafts were ready. Now we can only imagine the possible consequences of a encounter between the FAR Mustangs and the FAEC Thunderbolts.


To the triumph of the revolution in January of 1959, the Mustangs were transferred to the aerodrome of Columbia, Havana. Here the journalists saw the holes in one of them (tracks of the "warm" encounter of November 22) as tracks "of battle". For the lack of pieces and the problems of the new Air Force in 1959-1961, the two Mustangs, were frequently grounded. After the attack of April 15, 1961, preceding of the landing in the Bay of Pigs, was decided to repair them, and the N°400 is ready already on April 20 in Ciudad Libertad, when the battles already have finished. The F-51 N°401 was yet in ground in San Antonio.

Is interesting that the dictator of Nicaragua Anastasio Somoza proposed to the Cuban exiled of Bay of Pigs four F-51D Mustangs, by the heavy loses of the B-26 Invader. These F-51D arrived on April 18, 1961 to the air base of the B-26 in Puerto Cabezas, Nicaragua. But they were not used, being alleged that they were few known with that fighter, and that their range are insufficient until the combat zone.

In June of 1961 arrive the MiG-15bis, and the Mustangs are finally write off (and not in 1963 as wrote some sources).  They are painted (including with shark jaws). During the 70's the FAR-401 was exposed besides a Sea Fury in the Museum of the Revolution (ex- Presidential Palace). Today remains only one of them, the N°401 in the Museum of the DAAFAR, in Havana.

The F-51D FAR-401 today in the DAAFAR Museum.  Photos by Rubén Urribarres