Begins its production series in 1952, finishing in 1958. In total are manufactured for the USSR 7,999 MiG-17 of several modifications in 5 factories. 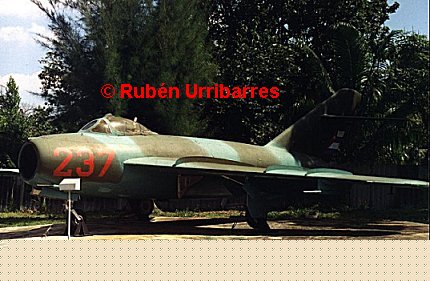 They are used in 30 countries, and fight in numerous conflicts as the arabic - israils Wars of 1956, 1967 and 1973, Vietnam, Afganistan, Angola, Ethiopia-Somalia, Chinese (Taiwan, Tibet), Biaffra, Yemen, Sudan, Mozambique, Sri-Lanka, Tanzania-Uganda, and other.

The Fresco in Cuba


The first MiG-17AS arrive at Cuba at the beginning of 1964, destined to Santa Clara, and they substitute the MiG-15bis. Its main mission was to fight as fighter - bombers. They were received of the versions MiG-17AS and MiG-17F several dozens in the 60's.  In spite of what some sources say, they not were received of the version MiG-17PF.  The fighter - bombers MiG-17AS were characterized for being capable of shooting air-air missiles, and Cuba was one of the few countries in receiving this rare one version.


In 1963 two F-8 Crusader of an VMF Squadron intercepted two MiG-15 of the FAR, that bother the reccon mission of a Lockheed P-3 Orion, boarding the Cuban water. The pilots of F-8 asked permission to confront the MiGs, but the permission arrive only when each side already go home. One of the Marine pilot, a Major, when arriving to the Key West Base, furious removed the helmet and kick it. To end of 1964 the history is repeated, when two F-8 of the VF-62 ask permission to confront a pair of FAR's MiG-17 that bother a P-3 to complete its mission.  After various minutes of wait, the permission finally was denied them. When they returning, they say that the next time they are going to shoot and alone then to ask permission, that the ROE rules of the moment themselves permit it. Both incidents went in international water, in accord  to the American version.

The fighter - bombers MiG-17 were in service in Cuba until the beginnings of the 80's, when already were assimilated the MiG-23BN, then being substituted totally in their Squadrons.


The most famous event of the Cubans MiG-17 went the desertion of one of its pilots to United States. This happened October 5, 1969, when the Lieutenant Eduardo Guerra Jimenez lands in the Florida in the MiG-17AS N°232.  Guerra Jimenez was one of the Squadrons Leaders of the Santa Clara MiG-17AS

Regiment,  and he was testing that MiG-17 that was repaired, to leave then to the smaller rank pilots. Guerra lands in the Homestead AFB, Florida, surprisely  for the Americans. In that moment in the base was found the personal Boeing-707 of the US President Lindon Johnson, and that incident shows its vulnerability to the Americans.  This serious incident provokes debates in the Congress, where the Republican Robert F. Sikes uses it as strong argument in favor of the Radar Program AWACS.  After this desertion, is produced a great purge in the FAR, being expelled dozens of pilot friends of Guerra Jimenez or with relatives abroad. The MiG-17 was returned to Cuba, and as says some sources, the transportation airplane that come to return it with the team of specialists of the DAAFAR, "accidentally" overflight various sensitive points as the Nuclear Plant of Turkey Point. The Captain Rafael del Pino was the responsible for the mission of return the aircraft, and the pilot  Raul Perez James of flying it in return to Cuba.

When was decided in December 1975 to send Cubans regular aviation units to Angola, Castro sends an Squadron with 9 MiG-17F and 1 MiG-15UTI, that become the "first" combat aircrafts of the Angolan Air Force (FAPA), composed only by Cubans, the FAPA was "founded" in a ceremony by the Angolan president Agosthino Neto January 21, 1976.  In the ceremony form the MiG-17 and MiG-21. The MiG-17 Squadron Leader was the major Jose A. Montes. The MiG-17F begin to fight against the separatist movement FLEC from Cabinda, at the north direction, leaving to the MiG-21MF the south direction, until the victory in April of 1976. In the following years they take part in attacks against the UNITA, until was substituted by new MiG-21, and then the MiG-17 are delivered to the Angolans.

In December of 1977 begin to arrive FAR units to this country, among them an MiG-17F Squadron and one of MiG-21, that participate in support air missions in the counter-ofensive that begun January 22, 1978, and that finishes with the rout of Somalia and the total liberation of the Ogaden in March 13. The Cuban aviation made 1,013 combat missions, the half of them with MiG-17F, that destroy innumerable tanks, gun, and other enemies objective. The MiG-17F pilot Lieutenant Eladio Campos dies when he was shoot down by the Somali AAA.  As interesting fact, in this conflict the Cuban MiG-17/21 Cuban together the Ethiopian F-5A/B/E against a country with MiG-17/21 too.  Although encounters in the air do not occur between Cuban and Somali MiGs, therefore the Ethiopian already conquered the air superiority before the Cubans arrived. The Cubans MiGs remain in Ethiopia, but they not fight more in this country, in spite of the Ethiopian conflict with Eritrea, and in spite of Western non base rumors. In September of 1989, with the new international changes, the last Cubans leave Ethiopia, being carried some equipment. See this war in detail.

In South Yemen the Cubans pilots fight in the MiG-17 of this country since 1973, in borders collisions with North Yemen and Saudi Arabia. In Guinea Bissau during the 70's a group of Cubans pilots fly too the MiG-17, forming and creating the local Air Force, and participating in missions against air space and naval violations.

The Cubans pilots assessed their colleagues of Vietnam. They helped to resolve the dilemma MiG-17/MiG-21 at the end of the 60's. In 1971 the Vietnamese high command chooses 10 pilots of the 923° regiment, for to be prepared in attacks to American ships. Its preparation was in charge of the Cuban advisor "Ernesto".  This famous operation is made on April 18, 1972, when Li Xuan Di and Nguyen Van Bay in two MiG-17F with two 250kg bombs, attack the Oklahoma City cruiser and the DD-806 Higbee destroyer of the 7° Fleet, causing them diverse damages.

Cuba has two versions of the fighter-bomber MiG-17: