Last combats in Oriente and the Invasion to West

The guerrillas victories in the Sierra Maestra and the beginning of the invasion of Che Guevara and Camilo Cienfuegos to the West in August of 1958, complicated the FAEC operations.

In August 19, 1958 the Army command in Bayamo report to the Operations Section G-3 of the General Staff:

"We ask you to order the FAE tomorrow day since morning, to prepare every available airplane for the Operation saturation.  In Santiago remain only three bombs of 500 pounds and and twelve of one hundred pounds....FAE should send bombs for the patroling airplanes".  They respond it in message signed by the General Staff Chieff Tabernilla, about the shipment of other 2 B-26 and others: "Tomorrow you will have in Santiago 12 airplanes, 100 bombs of 250 pounds, 50 of 500, 40 fragmentation clusters, 30 rockets of 5 inches.  Night you will have at 10.00 o'clock 1000 bombs of 95. Tabernilla"


In setiembre the Che Guevara's troop advancing in Camaguey, and suffers a ferocious attack of the FAEC: "Then the aviation located us, begin a bombing the B-26, the C-47, the large C-3 of observation and the little airplanes, over an area not over two hundred meters of side.  After all, we retire leaving a died by a bomb and carrying various wounded, among them the captain Silva, that did all the remainder of the invation campaign with a broken shoulder".  Che Guevara surely speech of the F-47 (says C-47) and C-47 (C-3 by DC-3) used for observation.

November 10 the FAEC begin by first time its night support missions to their troops, when the B-26 attack the rebels positions that surrounded the Army headquarters in Minas de Ocujal. In the morning the attack continued with great violence "the FAE work good, giving a great deal with its attacks, in the zones of Ocujal, Nicaro, Mayarí Arriba, Calabazas" said the General Staff Chieff in a report. During the final battles in Oriente from the 16 to December 24, the FAEC made 70 combat missions, of them 49 with B-26 and 21 with F-47.  The more active pilot during this period was Luis Buria (graduate in 1955) with 17 missions in B-26.

The FAEC transport during November and December of 1958 did 5 daily missions to the Dominican Republic bringing weapons and ,ilitary loads bought by Batista to the dictator Trujillo, evading the American embargo. The supplies include rifles San Cristóbal, grenades, mortars, etc. To end of December Batista buys in Italy 5,000 Garand rifles, that are brought directly from Rome to the base of Columbia by airplanes of the famous air company Flying Tigers, formed by various ex-pilot of the AVG.

The Battle of Santa Clara


The last battle of the Revolution began in December 28, 1958, when the Major Che Guevara begin the assault of the important town of Santa Clara, in the center of Cuba. With its capture the Rebel Army planned to cut the island in two, to impede that the reinforcements of the government passed from West to East. In Santa ClaraClear was based the Third military District, the Regiment 3 "Leoncio Vidal", with more than 1,000 men.  The FAEC begins to bring a reinforcement of several infantry companies from Havana to reinforce Santa Clara before the battle. In total were 3,000 men of the Army and the Police, with the tactical support of the
aviation. 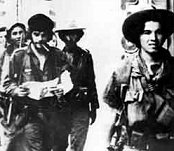 The first collision occurred at 6.00 o'clock of the morning of December 28 with the rebel platoon of the rebels by the command of Rogelio Acevedo (today Brigade General, and Director of the Cuban Civil Aviation Institute). The battle continue until the new year. The FAEC could not do a great deal of damage to the rebels, because that was a combat in the city, but he attack everything that move in the city streets out of the positions of the Army, which caused various civil deads and destroying houses, obliged the rebels to operate hidden. During this battle, with the extensive participation of the horses of battle B-26, F-47 and by first time, some British Sea Fury, Batista decides to flee. The tyrant saw that he was imposibe to gain the war, the Cuban people was against him and the United States press him to go, sending besides the carrier USS Roosevelt to the bay of Nipe to protect American citizens.

The FAEC seen by the guerrilla


The FAEC continuously press the guerrilla. He continuous bombings to the guerrilla zones, their bases and movements, obliged them to be maintained continuously in movement and to hidden in the mounts. The guerrillas did have low loses, but the peasants of the zone suffered, they houses were destroyed and animal annihilated. Many of them were seen obliged to flee.

Fidel Castro said: "We fight always in each important action against the artillery, the armored, and especially, the enemy aviation, he always was immediately present in any war action", the explosive for the rustic mines produced by the rebels "originated always of the rain of bombs that they threw against us, some of which did not explode".

A Mexican journalist among the rebels relates the atmosphere in March of 1958 in the Sierra Maestra: "Are the 16:30 hours, After crowning a mount, we begin the descent in a place called Alto de Escudero. To the fund, a valley, with charred remainders charred of six peasants houses to the ones that the government aviation destroyed with bombs. And by the way of aviation: the guide, distressed notifies: "¡An airplane! Go to the mount!"  I, frankly, do not hear anything and is that these guerrillas grasp easily the noise of the air motors to incredible distances. But prompt I come out of the doubt.  I also perceive the sound of the airplane.  The guide explains me: "Already they have taken this place as field of shot.  They shoot their machine guns against any human being that they see since up"

Problems of the FAEC in COIN operations


The effectiveness of the flights against the rebels of Fidel Castro, was affected for the almost total absence of coordination between the aviation and the ground troops, by which the information about the rebels positions arrived to late, that was old to the moment of the airplanes arrival. The B-26 could neither stop the provision of the rebels by the north coast. The aviation was employee more as a strength of support the regime and the politically loyal officials to Batista replaced the professionals. The corruption and ineptitude began to be extended for all the ranks. When the situation was more worse in 1958, already the FAEC could not respond with effectiveness by the lack of pieces and munitions. Various crew deserted, other were arrested, and by December of 1958 many of the B-26 and F-47D of the FAEC were grounded.


In this manner, being a strength with good professional preparation and equipment, adapted for a conventional war, could not be cash against guerrillas. It is to note the efficiency of the Cuban Army Air Force as per the air attaches of Cuba and the United Kingdom, praised the diversified system of maintenance of the diverse type of equipment and celebrated the training programs, including air to ground gunnery and rocket to ground firing. The British air attaché commented: "the mayor problem for the Air Force is to locate the rebels to attack them"."

Against the guerrillas were used extensively the combat aircrafts B-26 Invader, F-47 Thunderbolts, T-33, in recon flights the Piper PA-22, L-20 Beaver and AT-6 Texan. The transports C-46, C-47 and C-54 transferred troops among the theaters of operations and controlled the operations since the air. All they did thousands combat flights in the zone of operations. They threw bombs of various calibers, rockets and shooting the objectives. It is proper to mention that the PA-22 were used very effective in the COIN operations, when the right hand side door and the rear seat were removed and a 30. caliber machine gun was installed in place of the removed back seat. Also for dropping hand grenades inside glasses, so they could explode after contact with the ground below.


Must remember that by each mission was paid 25 pesos to each pilot and 10 pesos to each gunmen or technic, being the Cuban peso in that time almost equivalent to the American dollar.

The FAEC apparently loses for enemy action during the war only the airplane shot down by Guisa in November 20 by rebels fire. Besides, lost in operations some airplanes by other causes. Lt. Hector González Hernández ("loquillo") found his death when a 250 pound bomb builded in Cuba, detonated under the wing of his T-33 N° 705 south of Camaguey, in Camaguey Province on his way to the operations area, when try to bombing the Camilo Cienfuegos rebels. Die also by accidents in the operation zone the Lt. Brito and their gunmen in a Pa-22, the Lt. Ramón Ruiz Henández in another Pa-22 by Bayamo, The Lt. Luis Soto Camacho in an AT-6.


December 17 the American ambassador Earl T. Smith transmits to Batista that he must go. The 20 Batista said to the General Francisco (Silito) Tabernilla Palmero (their secretary and military chief of Columbia), that asked their brother Carlos, Chief of the Air Force, how many seats in the airplanes could be used in a future moment, in case that they had to be gone with urgency. The following day arrived the report, where presented that would have to travel in airplanes of the "Aerovías Q" (commercial airline property of Batista) and that could arrange of 108 seats. Batista organize in secret to flee.

In the early morning to January 1, 1959, without finishing of celebrating the new year, Batista resigns and flees of the country with its family and main leaders. The most loyalties military and civil persons of the regime were distributed between the five airplanes. They were in total some one hundred persons in the airplanes of "Aerovias Q". Little time later the DC-4 take off from Columbia. Batista distruts, and in spite to have announced that they would travel to United States, in the air notified to the flights control tower that they would go to Daytona Beach, Islands Nassau or Santo Domingo, but he would decide that in the air. All the flight was done in dark. In the horizon, Batista ordered the pilot leader of its transports, colonel aviator Antonio Soto Rodríguez, to take East direction, to the Dominican Republic. This was the flight 638. Other two airplanes followed after the first one. The two last, with the Tabernilla and the older children of the Dictator, continued road to Florida. Early in the morning the airplanes landed in Ciudad Trujillo (Santo Domingo). The General Ramfis, son of the generalísimo dictator Trujillo, received their in the Air Base of San Isidro. Besides its relatives more loyanties, Batista was accompanied by two servants and 25 suitcases.

In a four motor of Aerovías Q travelled the General Staff Chieff Francisco Tabernilla Dolz, three children of Batista, the SIM Chieff (Military Intelligence Service) Ugalde Carrillo, the chieff of the National Police Salas Cañizares, the Chieff of the Havana Police, in total 55 persons. They landed at 6.00 o'clock in Jacksonville, USA. They arrived so unexpectedly, that nobody was given account of them until they called the American police when Rubén, son of Batista, fall in a quarrel with a Cuban refuge that sold milk and sandwich in the terminal.

At the fall of the President Batista regime, 10 F-47, 14 B-26, 7 T-33, 10 C-47, 4 C-46, 2 C-54, 12 Sea Fury and more training aircraft such as AT-6, PA-18, PA-22, De Havilland Beavers and various helicopters in flying conditions became part of the Revolutionary Air Force. That finishes the history of the Fuerza Aérea Ejército de Cuba, that was replaced by the Fuerza Aérea Revolucionaria.