This was the most important fighter of the USSR in the 70-80's, with variable-geometry configuration and nuclear capacity. 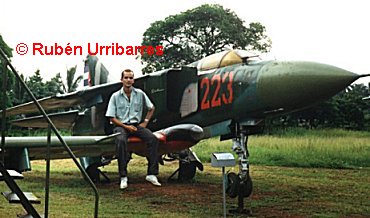 It was exported to 18 countries. Fought in numerous conflicts as the Liban, Afghanistan, Persian Gulf, Angola, Iran-Iraq, Libya.

The First MiG-23 flights in Cuba


The FAR receives the first MiG-23 on June 6, 1978, they were 14 MiG-23BN Flogger H and 2 MiG-23UB Flogger C, with serials from the 700. The reports that the airplanes that arrive to Cuba were MiG-23MS Flogger, or that was in 1977, or in number of 45 aircraft, are not correct. This first Squadron already was ready in September for the 231° Regiment of San Antonio of the Baños. 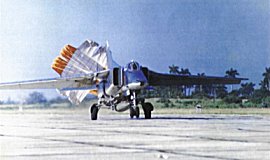 Their first action was already on October 3, 1978, when "they attack" the Naval Soviet Fleet on the sea 20km to the north of Matanzas. The MiG-21bis grasp the attention of the ships anti-aircrafts batteries, while the MiG-23BN appear in contrary direction in low level flight, and "strike". At the beginning of December of 1978 the MiG-23BN participate in the strategic exercises 'Granma XXII', where for them are assigned "objects' in US territory (as the air bases of Homestead and McDill).

The MiG-23 appear for first time in public during the great military parade of January 2, 1979, by the XX Anniversary of the Revolution. In spite of the bad weather conditions (rain, low visibility), 9 MiG-23BN at the command of the Colonel Rafael del Pino pass over the Revolution Square in three groups ('Troikas') with the variable geometric wings in three different positions: 16°, 45°, 72°. The pass in low level of the nine MiG-23BN impresses to all, for the visible satisfaction of the brothers Castro, that were in the tribune (the MiG-21bis not pass for the bad weathers conditions). Like affirms the General Rafael del Pine, when the American troops landing in Granada, on October 30, 1983, is ordered to maintain ready the MiG-23BN to attacks objectives in the Florida, as the Homestead air base and the nuclear central Turkey Point, as an answer, in case of US attack to Cuba. The appear of the Cuban MiG-23 provokes too that the Government of Ronald Reagan decide to deliver 36 F-16 Fighting Falcon to Venezuela. 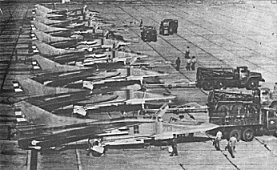 In 1982 arrives a second Squadron of 14 fighter-bombers MiG-23BN, and another in the second half of the 80's, until arrive at 45 fighters version. This permits that in 1991, with the arrival of the MiG-29, an Squadron with 14 MiG-23BN pass from San Antonio to Santa Clara, and later a second Squadron to Holguin. In 1984 the USSR delivers some 24 MiG-23MF Flogger E. These are the first MiG-23 air-air (equipped with a radar capable of detecting objectives to 45km to low level and under any weather condition) until the arrival of the MiG-23ML in 1985 with its 85 km range radar. The ML are the most capable MiG-23 version in Cuba, and various ML arrive from Angola in 1989-1990, after the victory of the Cuban troops. The reports that Cuba receives MiG-23MS Flogger not have any base, as does neither receive the MiG-27, that are confused for many people with the MiG-23BN by its shaped nose.

The appear in the FAR of these airplanes, considerably growed its attack capacity, which trembles the political circles in USA. Various congressman use American satelite photos where are seen the MiG-23BN in Cuba, and  declared that the agreements of the Crisis of the Missiles were violated with the USSR, therefore the MiG-23BN were evidently more effective that the Il-28 Beagle retired in 1962. The explication that the Cubans MiG-23 do not have nuclear weapons are not listened, and the Republican Congressman "discovers" too, that there is a Motorized Soviet Brigade in Cuba. This scandal was one of the factors of the rout of the President Carter in the following elections.

The Congress then threatens with not ratifying the treated SALT-1 of strategic weapons with the USSR.  President Carter is seen obliged to authorize two flights of SR-71 over Cuba at the beginning of November of 1978, to verify the presence of the MiG-23. Havana protests for this air space violation. On November 16, twelve American senators visit Moscow for the SALT conversations, and ask for the theme of the Cubans MiG-23 with the Soviet Prime Minister Alexey Kosyguin, that denies every threat for US. The next day, on November 17, 1978, the USSR admits for first time officially (before that Cuba), about the delivery of MiG-23 fighters to the island, but is declared that they are aircraft of defensive character, and that its configuration does not threaten the north neighbor.  At the same time is admit the presence in Cuba of a Soviet Motorized Brigade.

The senator Richard Helms says that he has reports that the Cubans MiG-23 are being equipped with nuclear weapons, and appears an article of Rowland Evans and Robert Novak about it threatens to US. This obliges to President Carter to call a press conference on November 30, 1978. Carter explains that the Soviet Government assure it that those airplanes do not enter in the offensive weapons limitations by the agreements of 1962. The crisis is dissipated little to little, and January 17, 1979, the US Department of State declares that they have arrived at the conclusion, that the Cubans MiG-23 not they are configured to carry nuclear weapons, and therefore, they not violate the agreements Kennedy-Jrushov of 1962.

On March 20, 1991 the major Orestes Lorenzo lands with its MiG-23BN N°722 in NAS Key West, Florida. Lorenzo was the second leader of the Santa Clara Air Base, and desert in his first flight in the MiG-23BN. The fighter was returned and Lorenzo ask for political asylum, but his family remain in Cuba.  Frustrated by not being able to achieve the exit of his family, on December 19, 1992 he secretly land in Cuba in a Cessna-310, he embarks his wife and two children, and returns to the US. This espectacular history was reflected in the book "Wings of the Morning', that describes inside the Cuban Air Force, including passages about the Angolan campaign, where Lorenzo flew in 40 combat missions.

Another event where participate Cubans MiG-23 was the shoot down on February 24, 1996 of the two airplanes Cessna-337 of the Cuban exiled organization 'Brothers to the Rescue'. In the action participated a MiG-23UB piloted by the colonel lieutenant Francisco Perez Perez, and the MiG-29UB of the too colonel lieutenant Alberto Perez Perez (brother of Francisco). The MiG-23UB served as radio delay between the ground radar controllers, while the MiG-29UB shoot down the two airplanes with R-60M missiles. The reports that that MiG-23 shoot down one of the Cessna-337 are not correct. But in detail this event is described in the MiG-29 section.

Characteristics of the Cubans MiG-23 Flogger