At present the MiG-29 are the most agile fighter of the world, between the series built fighters, not superable by its maneuverable in close combats. 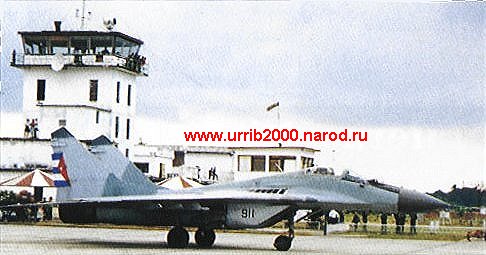 At left: The MiG-29 911 in the San Antonio AB. Picture from Air & Space Power Journal


Like declare Raúl Castro (Minister of the FAR) in 1993 to the Mexican newspaper "El Sol de Mexico", Cuba must to receive 40 fighters MiG-29 for a complete Regiment, but  receive only one Squadron. These are the most  expensive and sophisticated aircraft received by the FAR, keeping in mind that to the prices of the exchange with the Soviet Union, the MiG-21 were valued in US $1,5 million, the MiG-23 in $ 3-5 million, and the MiG-29 already $ 18-20 million.

As result of the economics problems of the USSR, the FAR receive only:

Castro ask about the MiG-29 in 1985, when Mijail Gorbachov arrive to the power. But Gorbachov begins its politica of approach to US, and brakes the asked. Castro begins to investigate with the Russians the cause of the delay, and after various months of silence, the Russians respond throught their Ambassador A. Kapto. He told Castro, that their government affirms that the MiG-29 can mot be delivered, because this fighter are not produced yet, they are testing it. Castro hears the explication, several times sight to the Ambassador ironically, and says that although the answer arrives late, and is negative, but at least it was a reply of some kind. The next day a FAR General in an meet with the Ambassador asks him, if the Ambassador saw an report of the American TV, where were show the MiG-29 produced in series and flying in several soviets units, and visiting other countries.  Kapto understood what Castro was insinuating, and Kapto transmitted this to Moscow with urgency.  Because of this the USSR began the deliveries of MiG-29, although by the disintegration of the Soviet Union Cuba never receive all planned aircrafts.

The shoot down of the HR´s Cessna-337


On February 24, 1996 are shoot down for the Cuban MiGs two airplanes Cessna-337 of the exiled organization Brothers to the Rescue. Participate in the operation two fighters: a MiG-29UB and a MiG-23UM. The loss of MiGs fighters that attempting to maneuver with slower planes (like the MiG-21PFMA crashed in 1982 over the sea when pursuing narco planes), showed that a slow and maneuverable plane like the Cessna-337 of Brothers to the Rescue, is a very difficult target for a fast jet fighter as the MiG-21 or MiG-23.  On the other hand, the MiG-29 (as the Su-27) is very maneuverable and can "yank and bank" very well at slower speeds. This was demonstrated in exercises of Cuban MiG-29 against Cuban little Polish-built PZL-104 Wilga planes.


The MiG-23UB stayed high and served served as a radio relay between ground radar controllers and the MiG-29UBs to help vector them to the BR´s Cessnas. Lt. Col. Lorenzo Alberto Pérez Pérez (in conjunction with other crewmembers) was the pilot of the MiG-29UB FAR-900 that shot down the two Cessna 337s, using R-60MK missiles. All the four Cuban Pilots having a plenty of flight time and Combat missions in Africa. This operation was not planificated, but was sucessful.


After this incident, the Pentagon propose to President William Clinton to bombing the MiG-29 Base of San Antonio. But he desist, by the conclusion that these were in strong refuge and well defended by SAMs.


The MiG-29 was the last combat aircraft received by the FAR, and are the best fighter in Latin America in close combat at that moment. All the 8 Cuban MiG-29 served in a Squadron of the Regimiento de Caza (Fighter Regiment) basified in San Antonio de los Baños. Its pilots belong to the group of FAR pilots that followed with the normal time flight volume, doing in their MiG-29 from 100 to 200 annual hours (the pilots of other equipment have very reduced the time of flight in fighters, and they complete their hours flying in transport airplanes). Russia continued the collaboration with some parts, and the MiG-29 participate in different exercises and events each year, as the air demostration before the military delegation of China of the Colonel General Yuan Shoufang in August of the 2001.

Today all Cuban MiG-29 are write off by the wear of their engines and parts, and the corrosion of its structure.